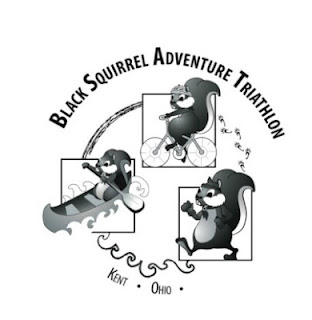 I'll be honest, I didn't really want to do this race!  It was held on the same day as the Pro Football Hall of Fame Parade and I'm a TOTAL parade junkie.    I even got up at 4 AM last year to carry a balloon in the parade so I could relive my high school days of when I was in the parade. Ha!   Going to the parade is probably in my list of top 3 favorite local summer traditions.

So when Nick said he would rather do the race than go to the parade, I wasn't exactly in agreement.  The race was short: 2 mile kayak, 5 mile bike, 2 mile run, which I used as a reason that it wouldn't really be "worth it".  Someone I changed my mind and am glad I did.

This race is part of a series called: 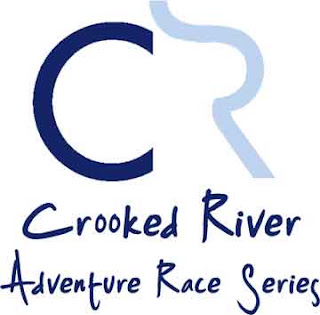 .
There are normally three races in the series but this year they had to cancel the third race.  The overall series winner after they add times from the races wins a $100 gift certificate.

What made this race unique was that you had to race the clock.  They staggered the starts by launching 4 boats every minute as to not clog the river.  So while you race you have no idea who you are up against [again they had relays and teams in the mix] or what time they started.   Some people even started a full hour + behind where we did since they had to hold a 2nd heat for the rental kayaks.

After the kayak section I was already tired but the bike was on flat terrain so that was fine.  However, I have never run on "jelly legs" quite like I had to on Saturday!  Crazy feeling and I felt like I was going sooooooooo slow.  However,  I ended up winning overall female by 5 minutes with a time of 1 hour and 37 seconds!   It was very strange finishing and having no idea how you did compared with the others until the awards several hours later.   Nick beat me by a smidge at 1 hour and 10 seconds, and we both won the Crooked River Series so we have $200 to spend at an outdoors store! Hopefully they have kayaks on sale! ;)

I'm glad we did the race but I really missed the parade!  We'll see who gets their way next year! :)

wow! i'm impressed. so cool you did it and won!!

WOW! Way to go! You're amazing. I hate jelly legs too! It's so painful, yet they feel like they aren't connected to your body. Hate that!

Congrats on the race! You guys rock (and in one of my favorite towns, too)! That parade will always hold a special place in my heart - I marched in it three times in ridiculous heat and full wool uniform. Ahhh, dear HOF ... :)