We Survived! The C word.

I'm not a doctor nor do I pretend to be one on TV.  That being said, I did diagnose Maela with colic.  If she didn't have "true colic", which is 3 hours of crying 3 days a week for 3 weeks or more, well she was darn close.  99% there.    Starting at 4 weeks old and continuing until at least week 10, she screamed and cried on cue (6 pm or so) each night so hard she turned red, and sounded like she would stop breathing for HOURS.   One night it was four hours.  It was to the point where I would start dreading evening by 10 AM.  We would avoid taking her places.  I had strategies to combat the crying such as a bath for her, a shower for me, riding the exercise bike, going outside, but nothing truly worked.

I read all I could read and I truly believe that colic is just developmental; an immature nervous system.  She is (by day) a very happy baby; doesn't ever spit up, normal eating and weight gain.  I don't think she was allergic to anything I was eating.  I don't think the crying was related to tiredness.  I just think it was a phase we had to get through.   It seems to be over for the most part (phew) and we have even quit being shut-ins during the evenings.

Now if we could only get her to like her carseat! ;)

SHE IS BLAINE ALL OVER AGAIN.  I really do feel we just birthed a female version of Blaine!  She looks like him too.  I think he stopped screaming in the carseat by 2.5 yrs old.  It will be a long 2.5 more years.

At 12:30 pm I was feeling a bit "weird" and called Nick at work to tell him I thought we would have a baby in the next 48 hours.

She is a sweet sweet baby who I hope turns into just as big of a sweetheart as her brother in time.  Poor kid had to help me through labor from 0 cm to 10 cm, then deal with me having a 103.3 fever 5 days later, and then another fever a few weeks later.  He brings me his first aid kit and tells me to put medical tape where it hurts.   Haha!  Love that little guy.  How did I get so lucky with these amazing kids?! 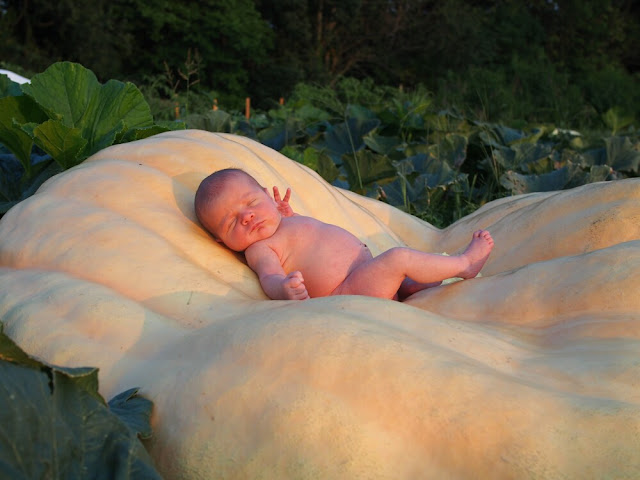 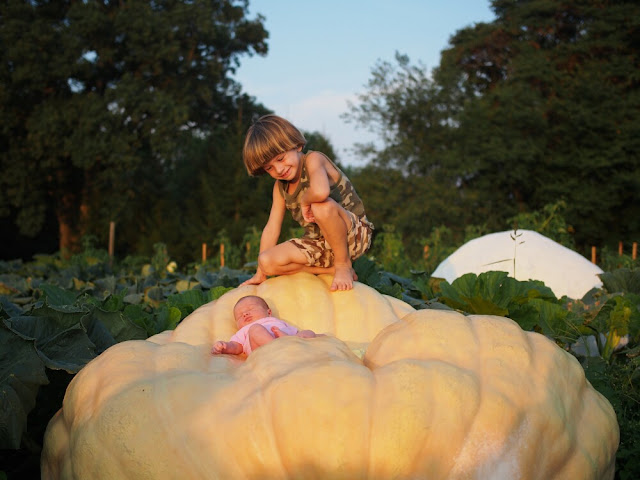 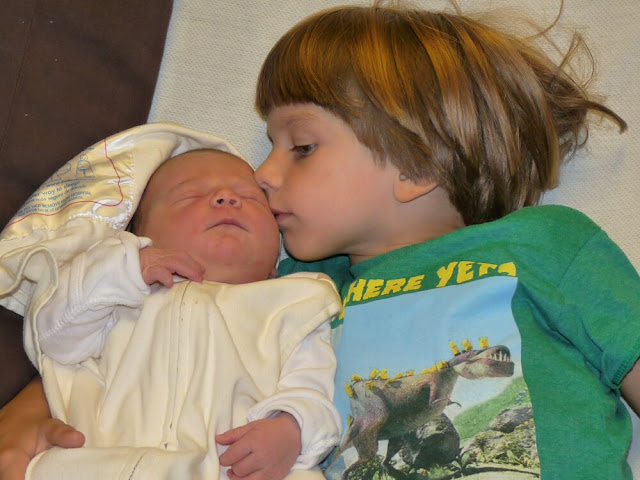 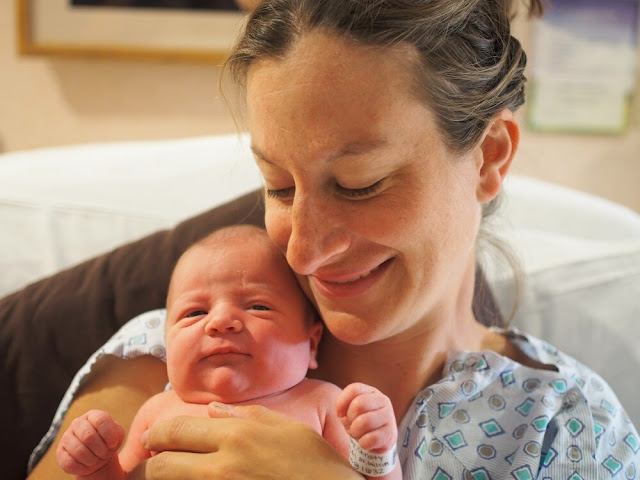 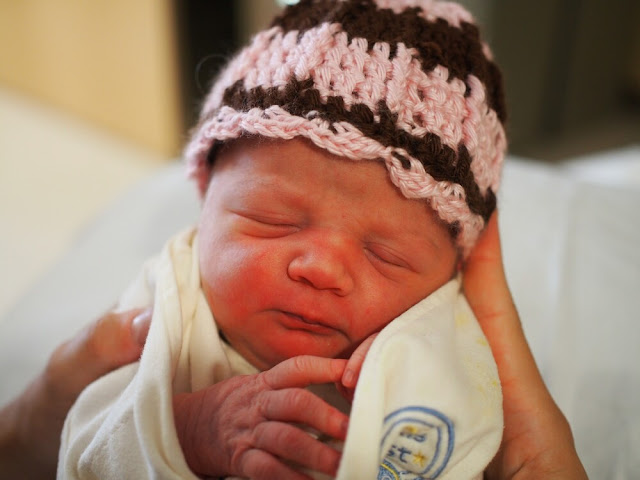 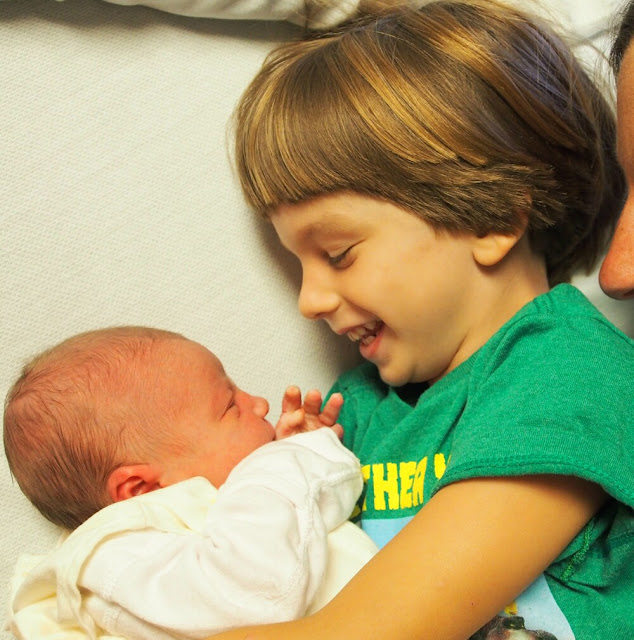 
I had my positive pregnancy test December 21st which made it fun telling family on Christmas.  Of course at first I wanted it to be a girl, who wouldn't want one of each, but Blaine wanted a boy sooooooo bad that I had convinced myself another boy would be easier and actually thought it probably was a boy.  I have had pretty much had the exact same pregnancy minus the fact I'm 5 years older and little things like a stiff back bother me much more.  Then of course the fact my belly is much larger this time around has made me ready to give birth like NOW.   I just want to fit in my normal clothes again and do normal things!

Due date is September 2nd!

I have checked in our owl boxes a few times since we saw the owl sleeping and hadn't seen anything again.  Well, yesterday I was in my living room and looked outside, noticing something fuzzy sticking out of the owl box.   Zoomed in with my camera, and BAM!  OWL!  These things really are tiny, considering the opening of the box is only 3 inches.  Nick snuck out and got the front shot.  Little Guy was trying to warm up up in the sun I think; it was only 3 degrees! 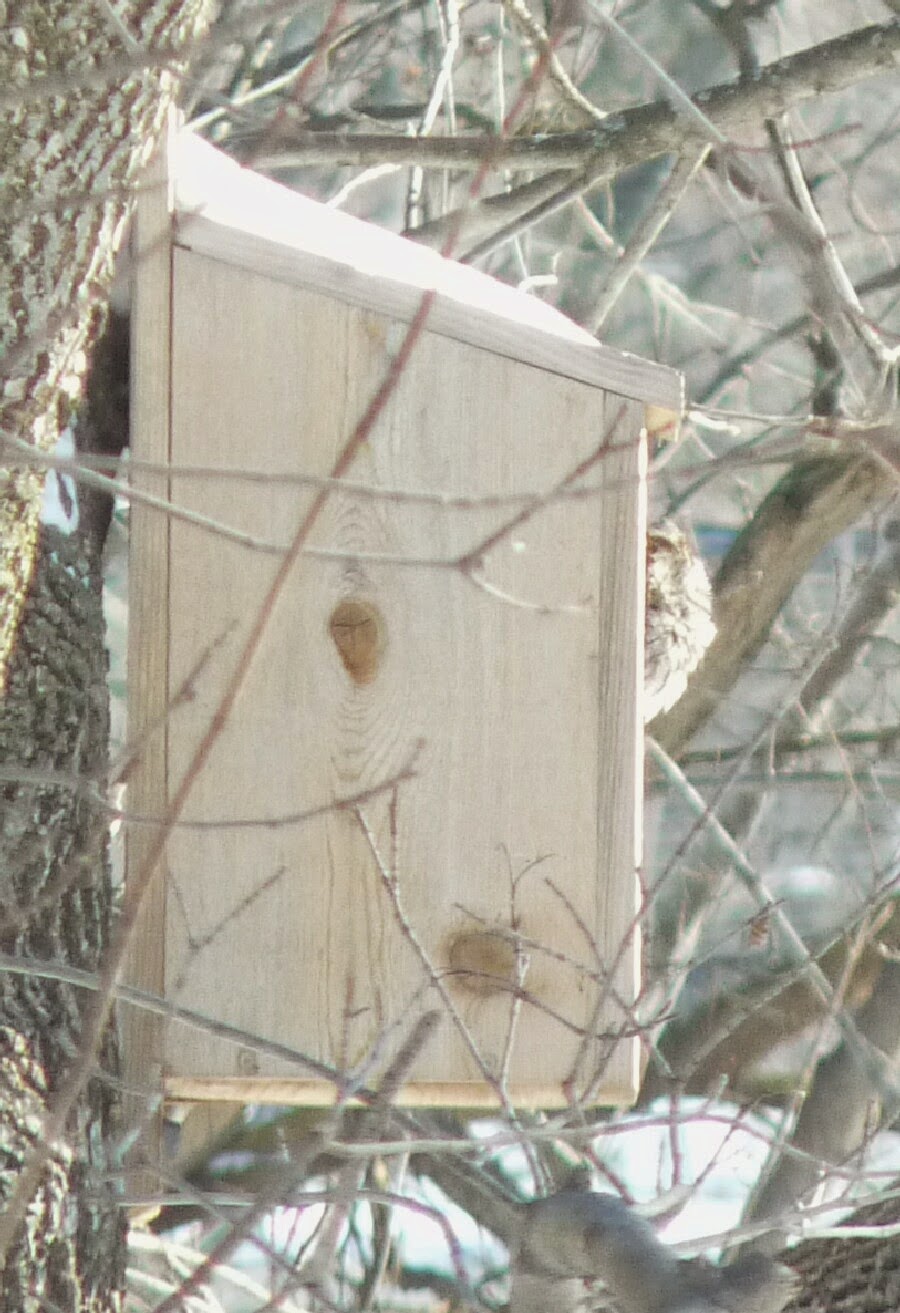 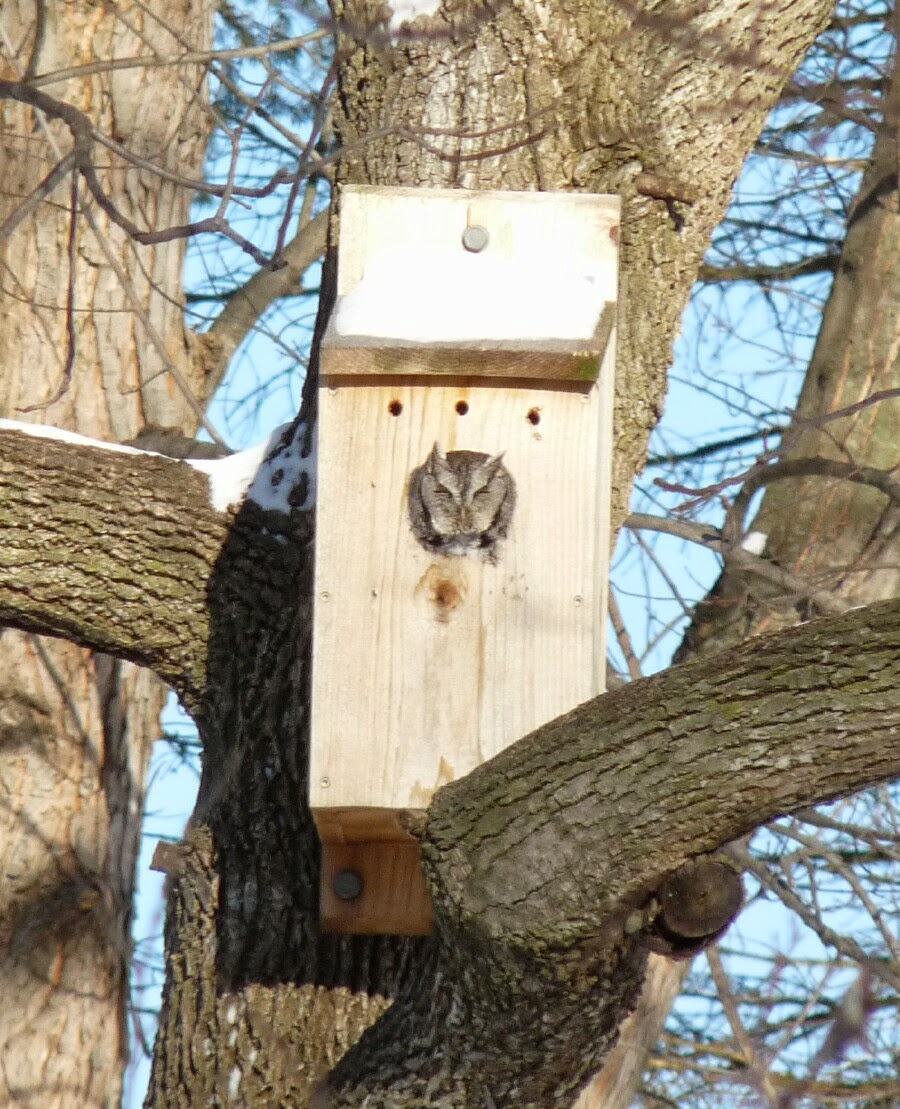 Then, later in the day, I saw something fuzzy sticking out again! This time the little guy was awake! I think I'm in love! :) 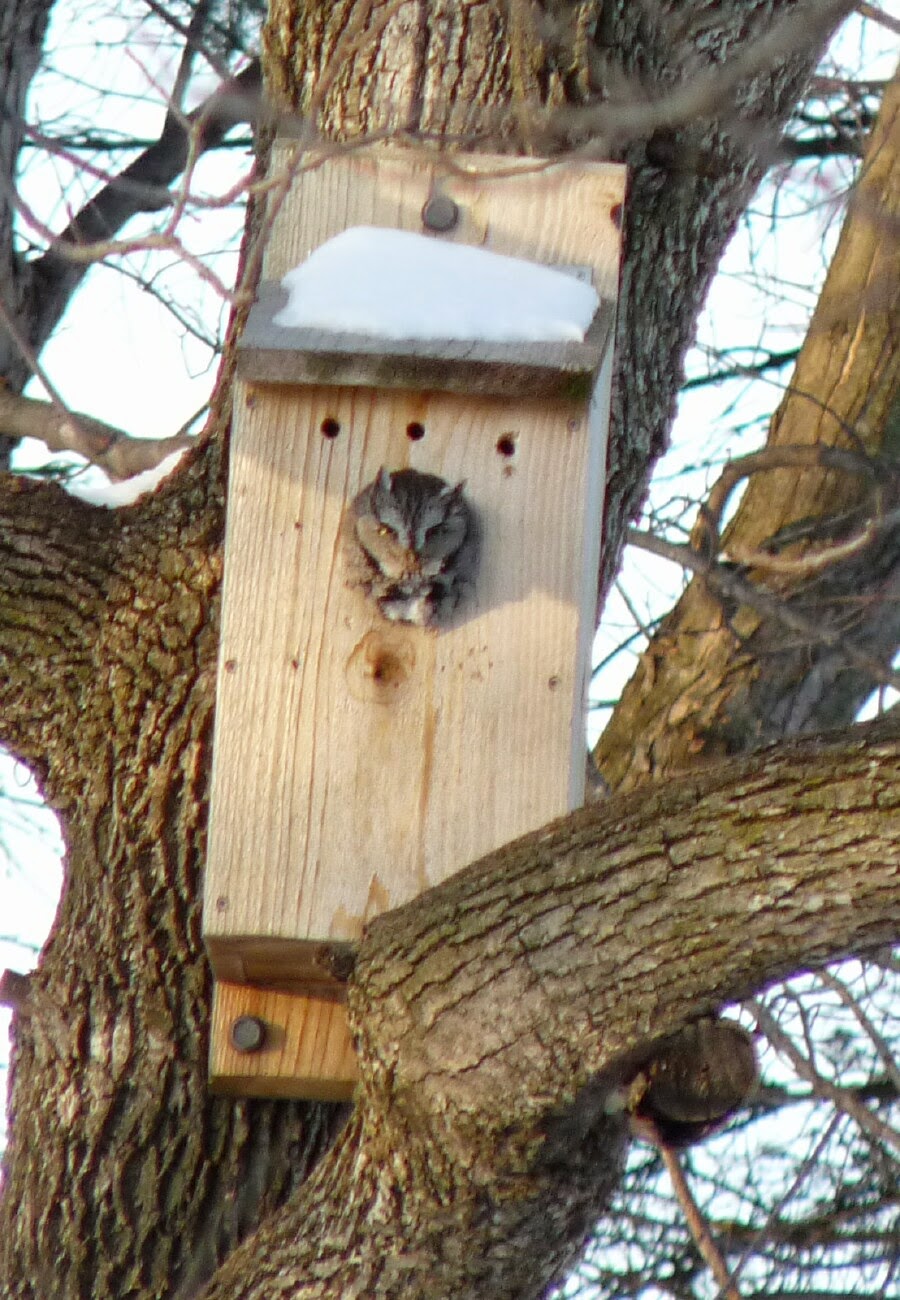