These are all for selling!  We probably have 120 "prizewinners" [a variety], 65 "polar bears", and also carving pumpkins, squash, and pie pumpkins. 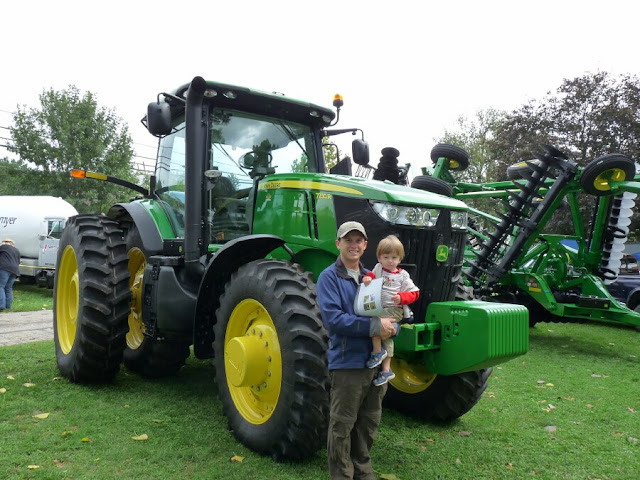 Our county fair was in late August and the next county over a week later.  We visit both every year.  NOTHING IS BETTER THAN GOING TO THE FAIR!   Blaine had a blast, I had a blast, and it is definitely just one of those traditions I live for.    From the 4-H peanut butter milkshakes, to the fuzzy cows, bunny barn, art building, veggies, flowers, band shows, freebies, oh my. Too much fun stuff to name!
1 comment:

Prayers for a "Stranger"

Not sure when I started reading Elizabeth's blog but know I've been reading it since at least Nov 2010.  Bloggers are strangers yet friends.  Well, this was probably the saddest thing I've ever read on a blog.   Sad isn't the right word. Tragic, horrifying, unfair, want-to-scream, need-to-sob, sort of news.  Please pray for Elizabeth, Grayson, and their whole family for strength while they travel the unknown road ahead.
3 comments:

This has been the race I've been looking forward to all year.  In its inaugural year, it consisted of a 5.5 mile run [broken in 2 parts], a 3 mile kayak, and a 12 mile bike ride.  Best part?  HOMETOWN RACE!  The running was on a trail I run on several times a week [an old canal towpath that has been converted to a bike path], then we hopped into our boats approximately 1 mile from my house, and the bike route was on super scenic local country roads.

I was pretty nervous going in because I had no idea "what type of people" would enter this race.  Ex:  I know I can survive 5.5 miles of running but I also know I can't do it nearly as fast as I wish I could.  So if some super fast runners were entered, I knew I would have trouble making up ground.

Looking around the morning of the race, Nick and I both got the "oh crap" feeling.  People just looked more "in shape" than they had in the last race, LOL.   We always look around and say things like "they look FASSSST" about other people.  We said that a lot that morning!

Turns out we really didn't have a lot to worry about!  I kept tabs on where I was at during the run, and when I hopped in my boat, I knew I was the 5th female.  Turns out that 2 of the girls in front of me were in teams [when I passed them in canoes with their team-mates, I figured it out], and the other 2 in front of me were individuals that were slow at kayaking.  One had a slow transition into her boat and I actually launched in front of her and the other one I passed in the first 100 yards on the river.  There was no looking back from there!  After passing several more guys on the river, and running to where the bikes are, a race official told me I was in 6th place overall, and the 1st female.  She said, "GO PASS SOME MORE!"  So I did!  I passed three more guys on the biking section for a 3rd place overall finish!

I'm way more excited about getting 3rd overall than I am for getting 1st female.  Plus you have to factor in that the guy who won does Ironman's.  He's doing Ironman Hawaii in a few weeks!  Freaky fast.  Nick ended up 2 minutes behind me, for 5th place overall.   The local newspaper had the triathlon on the front page and I got quoted a few times in the article so that was neat. Nick admitted it was the first time he's ever been in the newspaper for an athletic event in his whole life. LOL.

Looking ahead, we are going to do an 8 hour adventure race on Sept 23rd that includes a 30 mile bike ride, 3 mile canoe, swimming, and orienteering.  SHOULD BE INTERESTING!
5 comments: