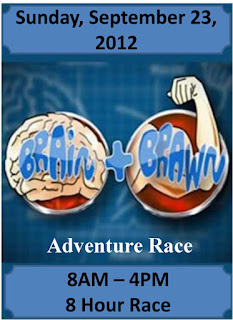 Have you ever heard of an adventure race?

"Adventure racing (also called expedition racing) is a combination of two or more endurance disciplines, including orienteering (if an orienteering map is used) and/or navigation (when non-orienteering maps are used), cross-country running, mountain biking, paddling and climbing and related rope skills. An expedition event can span ten days or more while sprints can be completed in a matter of hours. There is typically no suspension of the clock during races, irrespective of length; elapsed competition time runs concurrently with real time, and competitors must choose if or when to rest" says Wikipedia.

Back in mid August, I stumbled upon this race but wasn’t convinced I wanted to do it.  8 hours is a looong time.  What in the heck is orienteering anyhow?  Swimming in late September?  At 8 AM?  No thanks!

Well, what an adventure it was.  The race course was a secret until the day of the race.  I had no idea what I was in for!  The biking was EXTREMELY hilly and had you find 2 “checkpoints” on the way to the bike shop, 17 miles away.  From there, we had to run 3 miles to the canoe launch point [which happened to be the same place we launched for the triathlon a few weeks before].   After canoeing  3 miles, it was back to the Wilderness Center  for more adventures.  You had to go to the planetarium on the site where an expert star gazer had you identify things, you had to visit the rock walk to identify types of rocks, you had to climb a fire tower via a cable ladder [caving club volunteers there], you had to collect plants in a baggie throughout the day that expert plant ladies graded you on at the end, you had to answer math questions, and then of course the orienteering course where you went around with only a compass and map to locate up to 23 checkpoints in the woods.    Whoever found the most by 4 pm won.

Oh and they cancelled the swimming part due to cold temps.  Yay!

PS Almost forgot, right before the race started they told us we had one more thing to do: carry an egg with us all day!  LOL!

All in all, we survived, were EXHAUSTED, bleeding, and itchy [lots of bushwacking], and we got 2nd place to a team that had quite a bit more athleticism and experience than us [the girl can run a 4:50 mile and the boy does adventure races pretty much all the time] .  We only lost by 1 checkpoint so I’d say we did OK!   We estimated that we ran between 10 and 13 miles and we biked 35.  I might be closer to that half ironman than I originally thought [it is on my bucket list].
4 comments: