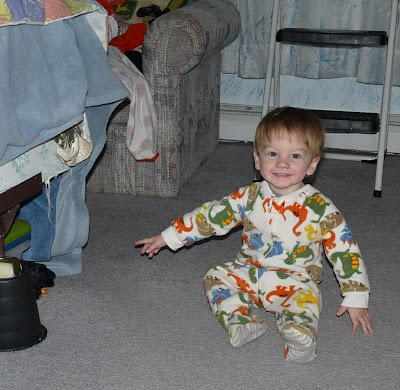 HAPPY HALF-BIRTHDAY, BLAINE! My little huggie huggie is my everything and I just wish I could keep him this size forever! His energy and enthusiasm is just so amazing and I don't want it to ever change. My absolute favorite time of the day is after his evening bath when he runs down the hall naked, shrieking with delight. How long does that childhood innocence last?

The Other Mom at the Sandbox

It was a cool but unseasonably warm January day. I bundled up Blaine and headed to the park. Not suprising, we had the place all to ourselves. We ran, played, dug, built, and had a ball. Then in walked a 3 year old dressed in a spiderman suit and a jacket. "HI!!!" he yelled enthusiastically while waving at us. He ran, he played, he smiled, having a great time. He eventually made his way to the oversized sandbox that Blaine had been playing in for the last hour. I was sitting on one edge, his mom sat down on the other. My heart stopped. It was her.

What do you say to a mom you haven't seen in 12 years?

What do you say to a mom you've been praying for daily over the last several months?

What do you way to a mom who buried her 8 month old son only 2 weeks ago?

My chest was tight, my heart was sobbing, but my heart was smiling all at the same time, watching her with her son, living life and trying to imagine the pain in her soul.

I said something; not enough. There could never be enough or the right words to say. I wanted to give her the biggest hug in the world. I refrained. Then we proceeded to talk the normal other-mom-at-the-sandbox talk. Kids, husbands, grandparents, sleep habits, foxes, coyotes.

She mentioned them selling their house to move closer to her husband's work. Too many tough memories in this house anyways. What she didn't know, is everytime I'm at that sandbox, I will be filled with many thoughts of her, her son, and her son who has left this earth.

When I went home that day, I thanked God for the chance encounter, which I believe wasn't chance at all.
7 comments:

HAPPY FRIIIDAY! 53 degrees and sunny. UN-FREAKIN-BELIEVE-ABLE! I love love love winter and ice and all that but I'm really loving being outside all day everyday.

I took this pic earlier in the week: Blaine thought it was hilarious to feed the snow to the goats next door. They didn't find it as amusing! :) 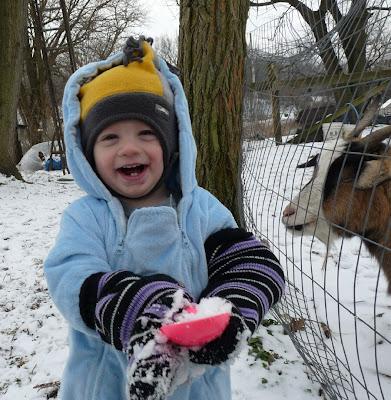