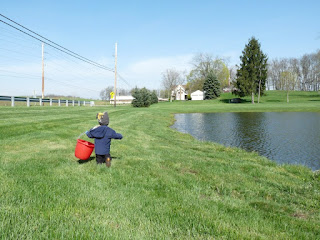 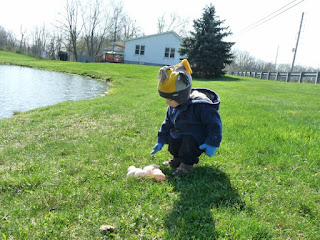 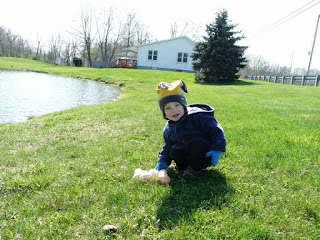 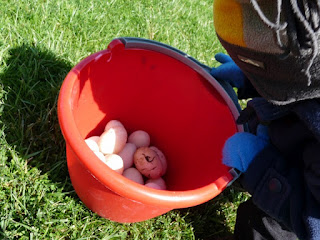 Blaine went on his first Easter Egg hunt this Thursday and had a blast.  He immediately knew what to do without me even telling him.  Well, we had the real deal as far as egg hunts today.  My neighbors domestic ducks have been randomly laying eggs and leaving them.  The ones in the grass have been smashed / eaten by critters but the ones just inside the water were fine.  Blaine and I fished them out and Dadda will use them as coon bait in his trap!  Fun day!  We got 13 duck eggs and 1 goose egg!
5 comments:

Choosing a name was the #1 toughest part of pregnancy for us. No joke! I'm really envious of people who already have their boy and girl name picked out and they aren't even pregnant yet! LOL.  Being a teacher, I wanted a name that was unique and that I didn't have a negative memory attached to.  What you see in blue was my list of boy names I liked.  Nick hated every one of them.  So I got five baby name books from the library and luckily stumbled upon the ones in purple that I also liked. 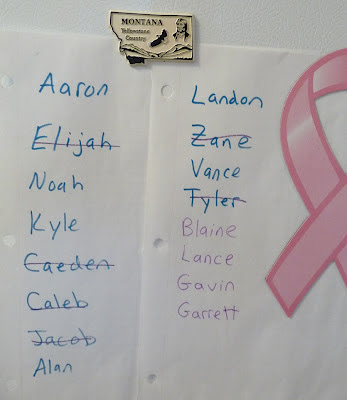 Nick agreed on Blaine.  Phew. I actually fell in love with that name long long long ago.  Every hear of Blaine Wilson? 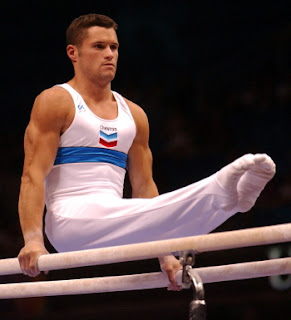 Famous male gymnast from Ohio.  He was hot.  He had big muscles.  And he had a unique name that was unforgetable to me.  I definitely did not name my child after him, but he was the ONLY Blaine I had ever heard of as of July 2010 when I chose that name.

Jump to October 2010.  If you watch Glee you'll recognize this face: 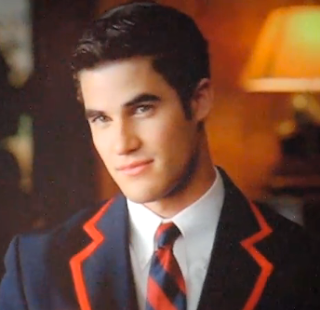 Thanks to Blaine on Glee, I doubt my Blaine will be the only Blaine at his school.  But I guess that's ok, way too many people think his name is BLAKE when I tell them BLAINE over and over.
So there you have it!   I don't enjoy picking names, waaay too stressful! :)  I read in a magazine today that 10% of parents don't like the name they chose for their child.  Well, I'm more in love with the name now than I was when we picked it.  I think it is the perfect name for my little bunny buddy. 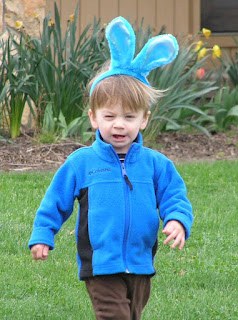 Lots of seed starting going on 'round here this week! Nick was less than thrilled with the quality of work from his "helper" but the helper had fun. ;) 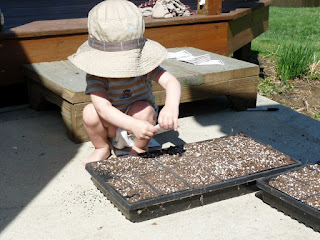 Thanks to the world of facebook, while pregnant I found out that not only one but TWO of my former classmates from high school were both having boys and we all three were due on the same day, July 13, 2010.


BLAINE FINALLY GOT TO MEET ONE OF HIS DUE DATE TWINS!  It was so neat because I had been watching the other kid grow up via facebook for the last 20 months since he lived on the west coast and now the south coast (is that even a word, ha).
Blaine was born 5 days late, and this kid 7, so they don't share a birthday but will always be twins in my mind! 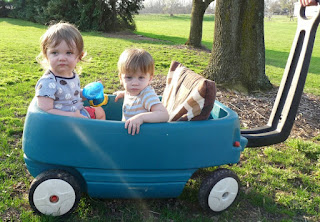 Something that happens to me allll the time [but more-so when I was teaching] was when I'd have a dream that someone was in and then I would see the person the next day.  I would want to say, "HEY, LONG TIME NO SEE!" since it felt like I saw them just a few hours ago.  However, then I'd realize it was a dream and that, for example, it is not exactly appropriate to tell a student that they were in your dreams.  LOL.

Well the weirdest of all weirds happened the other night.  In the dream, I was at a funeral of a guy and I had to speak.  It was the saddest thing ever; he was young [about 32], leaving behind his heartbroken wife.   Well of course, the next night I see him at my church and WOW.  Talk about relieved he was ALIVE but such an awkward thing!  Definitely didn't tell him about that one.

Before Blaine was born and even after he was here, I had it in my mind I didn't want to co-sleep.  You know how that goes.  Plans schmans.  It started that I'd bring him to my bed when he woke up around 5 AM, when Nick was already out of bed getting ready for work.   Then it became that I'd bring him to bed when he woke up the first time.  Which somedays was 5 AM but somedays is 11 PM [*grin*].   Now it is to where if Nick is out of town, the kid starts the night in my bed [*double grin*].

Do you know the country song that goes "Let them be little, 'cause they are only that way for awhile" ?  I'm pretty sure by the time he's a teenager, he will sleep through the night, in his own bed, and not want to snuggle with mommy.  Until then, I'm enjoying looking at my little angel at all hours of the night.
10 comments: 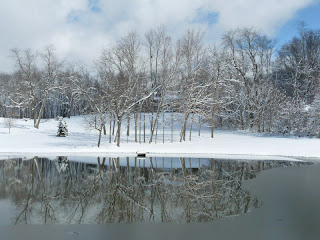 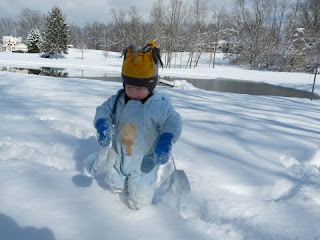 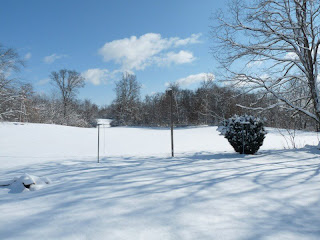 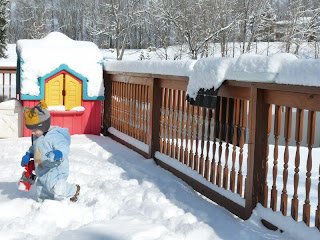 Been dying to show off what happened in our neck of the woods this week! :)   Winter finally arrived but the snow melted the next day.  Forecast is for 60's this weekend!
1 comment: