I caved. I got out my germination station today and started marigold seeds! With a heating pad keeping this thing at 85 degrees, this station is THE BEST! It started all my pumpkin seeds last year to a germination rate of 100 % (very important when some of the seeds I was starting go for $800 in auctions! Not that I even paid one penny for them, but that is besides the point. They are valuable and cannot be wasted by faulty methods!). 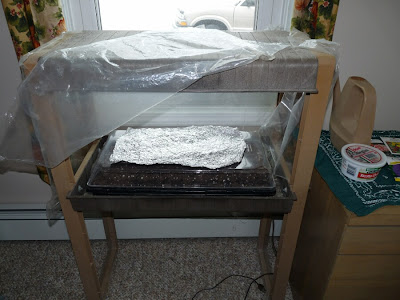 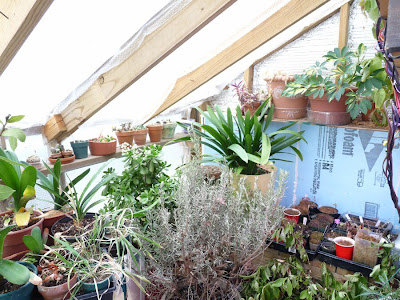 I haven't really mentioned much about this on my blog, but Nick grew the largest tomato in the world last year! 7.18 lbs! This is cutting off of that plant, still alive and well! So technically in the plant world, it is a "clone". It'll be neat to see how it does next year. 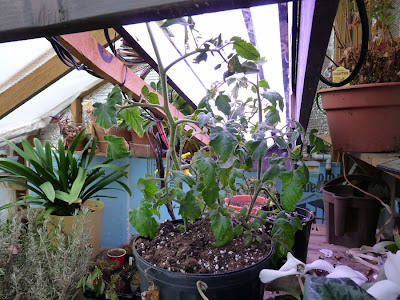 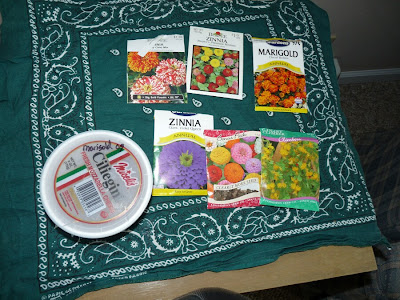 I have to start some cuttings off of my geranium plant! It has been flowering all winter in the greenhouse. 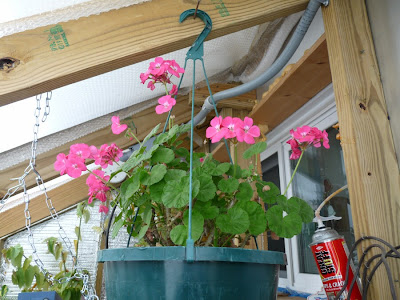 1) Was this pregnancy planned? My first visit to the doctor, I was asked this question at least 5 times! HECK YES IT WAS PLANNED! In fact when the first home pregnancy test turned up negative I almost cried. I'm so much of a planner, I wanted that baby born in the summer OR ELSE. I realize life doesn't always turn out as planned and not everyone is that lucky; I was ready to accept anything. HOWEVER, lesson learned: don't take an expired pregnancy test. A new, non-expired test came out positive two days later. :)

2) Did you think it was going to be a boy? I never would have came right out and admitted that I thought it was a boy; but if I had to tell you my "gut feeling", it was that I was thinking it was a boy. Sure everyone in our family was "thinking" it was a boy; but I know they didn't really THINK that, it is just what they WANTED. In all three of my dreams, it was a boy :).

3) Did you want a boy or girl? Of course I can give the standard answer and say I'd love either. I would. But based on the fact that I totally don't "do girly"; you know, the shopping, the dresses, the pink, the hair appointments, the princesses, etc, I PREFERRED A BOY! The 2nd can be a girl now; I was mainly fearful of all girly girls.

4) What are the worst parts of pregnancy thus far? I have been lucky! Nothing much to complain about. Definitely the worst for me have been the MAJOR BREAKOUTS that happened in the beginning (I had to wear my hair down for 4 monthes in embarassment) and the bigger boobs (try having NONE and then having SOME...it's downright annoying).

4) Are you still sick? WORSE THAN EVER! Its just a cold but try being on your feet all day and talking ALL DAY when you lost your voice 4 days ago. Torture.

5) Is Governor Strickland really eliminating snowdays from Ohio schools? Yes, and he is evil. Since we won't have snowdays 2 years from now, we need to use all 5 this year. Thank goodess IT IS SNOWING AGAIN! TWO MORE TO USE!! 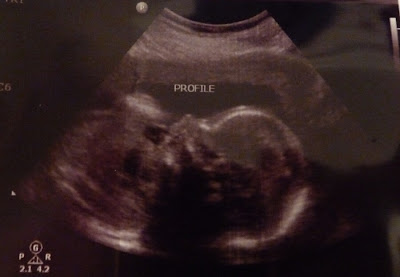 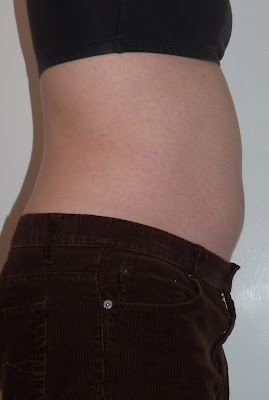 Yep I'm officially getting fatter! The times of every week looking the same I can tell is pretty much over.
The ultra-sound was awesome but I totally almost passed out; guess that is pretty common. Towards the end I was like WHEN WILL THIS END as I got hotter and hotter and everything got blurrier and blurrier. It was really neat seeing all the little external and internal body parts; made everything more real.
What is it? BOY! YAY!!! I just hope he doesn't bring frogs into the house like all the little boys on the TV commercials :).
8 comments: 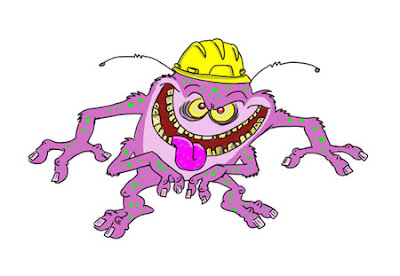 I guess my war on germs has been lost. I overkill on vitamin C (eating oranges and orange juice everyday), use Purell and Lysol like it is my job, wash my hands between every class, and get 8 hours of sleep per night. 1900 germy students all enclosed in one giant building is just too big of a battle to fight I suppose!! Hopefully it turns out to be a minor cold and I can get over it quickly without any medicine of any type. Looking back, I can't believe I made it this long without getting sick once!
3 comments:

I mean Appolo Ohno is still my winter olympics hero and all but she's now up there too. LOL.
1 comment:

Well today is 19 weeks! AND ITS A SNOWDAY! Definitely a day to celebrate. Everyone knows what that means...1 WEEK FROM TODAY WE FIND OUT BOY / GIRL! Yay :)

Still not much different in the picture department: 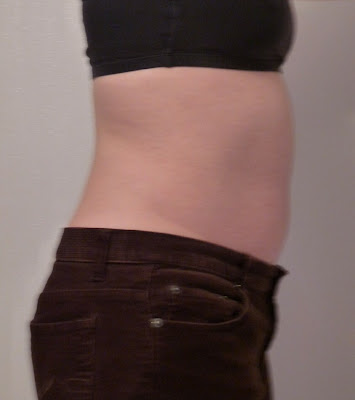 Sorry the pic is blurry; the bathroom fogged up the camera lense.

In other news, I'm totally a tweener; 90 % of my normal pants won't fit (don't get me started on that Bella Band thing everyone raves about b/c I couldn't stand the squeezing feeling) but maternity pants are still huge. Elastic waisted skirts are my best friends for school clothes!
8 comments: 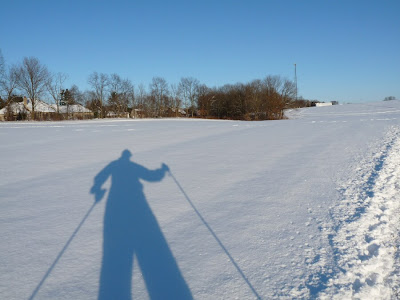 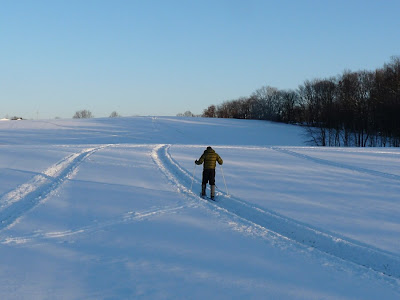 Regardless of what my great-aunt Imy / great-uncle Carl / great-aunt Cheryl / anyone else thinks, I feel cross country skiing is perhaps THE MOST PERFECT pregnancy exercise. I think as far as they (old fashioned thinkers) are concerned, pregnant women should be lying on the couch for 9 monthes. Not exactly the best way to stay fit and healthy. If doctors approve women to continue RUNNING as long as it is "comfortable," then seriously, how awesome is skiing?! Don't worry I don't do running in the winter regardless. TOO LAZY!
Cross country skiing is low impact, has a pretty low risk of falling (I don't really have a protruding abdoment yet anyways), and is not super duper strenuous. Just enough exercise to feel "hot" and there-for know you are getting a workout. I've skiied throughout the last two monthes and 4 of the last 5 days; I'm majorly dreading the day the snow melts.
4 comments:

This week we had 2 snowstorms but only 1 snowday off school (snow likes to hit on weekends in Ohio). Really pretty pictures along with fun times snowmobiling and cross country skiing.
We went to do our first speaking engagement, where-else, but near Circleville, home of the oldest pumpkin weighoff in the nation. They even have a pumpkin watertower there! It was good practice for The International Pumpkin Growers Seminar where we have to talk for an hour!
My pregnancy is now at 18 weeks and now more than ever, EVERYTHING is making me really mad. Now I know why pregnant women are need to worry so much about high blood-pressure. School things don't really get to me, it's just the little things. Yesterday it was my garage door, my electric bill, my gas bill (our house is normally in the 50's with our basement in the 40's and our bill is still over $200??!!!!!!), pumpkin seed requests, you name it, I was fired up. I tried to tell myself not to let stuff bother me, but my brain wouldn't listen! And it won't calm down easily! I cannot ration with my anger even if I try to. LOL. Hopefully this will be short lived and maybe I'm just having a bad week.
Mountains in the flattest part of the state: 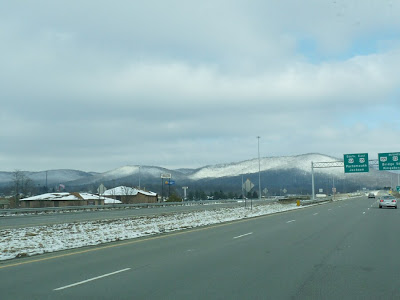 Nick's snow cave. It took a LOT of convincing to finally get him to agree NOT to sleep in there this week. 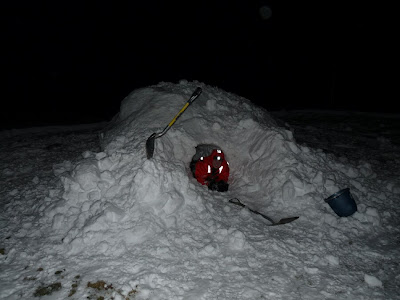 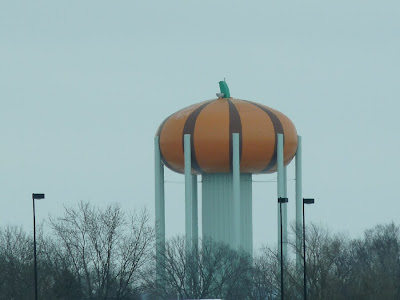 They had weird icy snow down south: 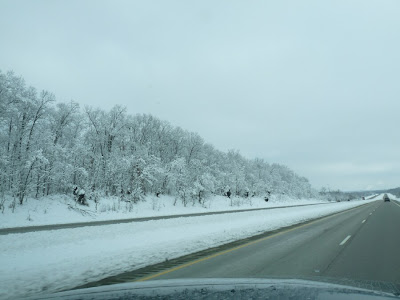 Looking off our deck: 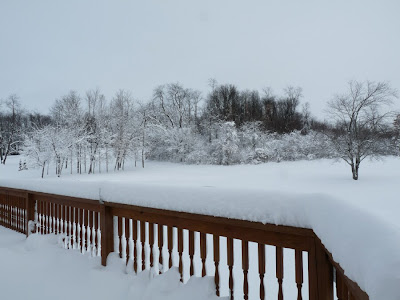 Buried under 13 inches of snow! 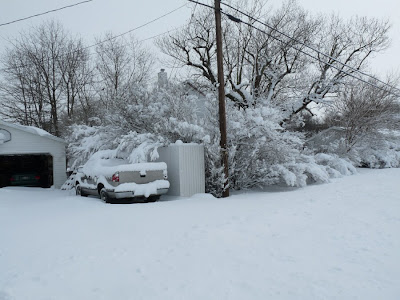 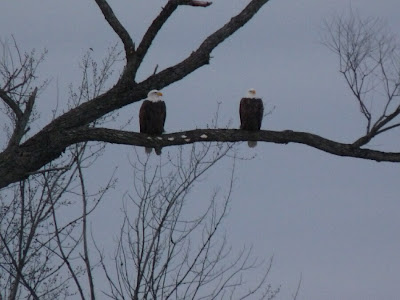 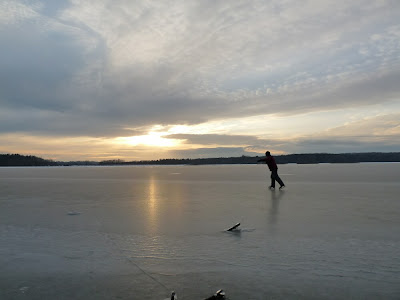 I never intended for this to become BIRDS OF PREY week on my blog but hey, what happens happens!
THE MOST AMAZING THING EVERY HAPPENED THE OTHER NIGHT!
Ok well the hawk was cooler but this was cool too. We went skating on Monday and Tuesday evenings @ a lake near here and the ice was awesomely smooth. Nick isn't very good at skating so I just have to post this video for laughs (notice the goggles and survival suit).
Well after the 2nd time skating out to the island, I saw Nick staring over to the side and I said, "You're totally gonna fall! Watch where you are going! WHAT ARE YOU LOOKING AT?!!!" Yep there had been 2 bald eagles there the whole time! He figures they were probably there on Monday too. Totally awesome. I nor my family had ever seen them in Ohio before! I'll have to look up what omens birds of prey have. Or not. I might get scared.
5 comments:

This was on last night and some of my students saw it! I had never heard of the guy!