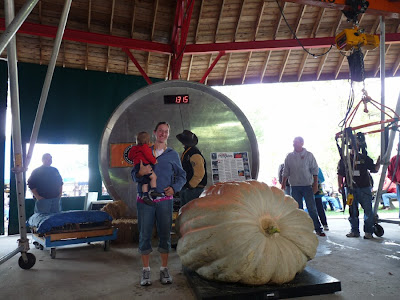 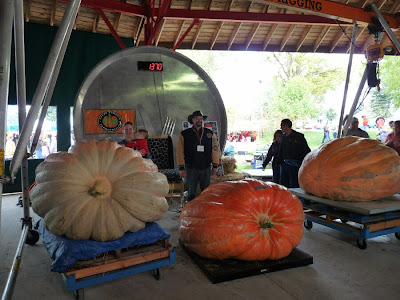 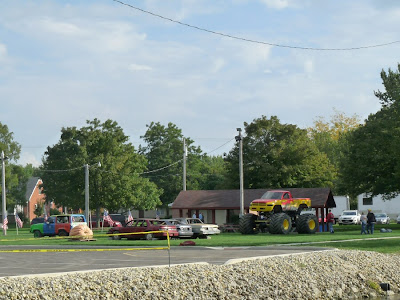 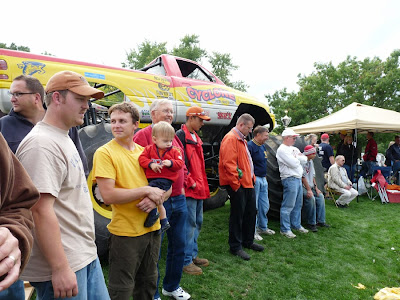 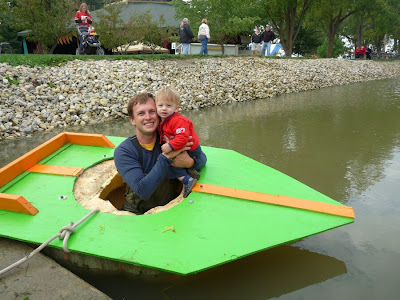 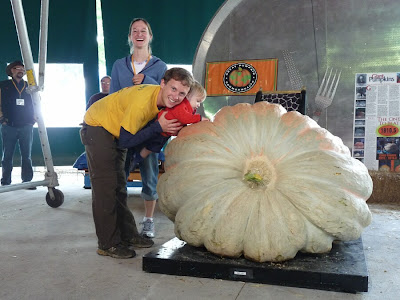 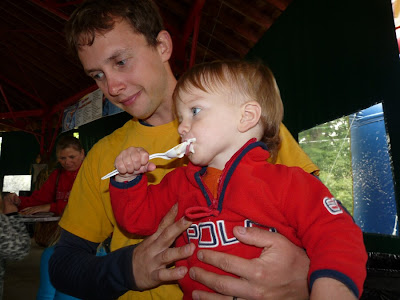 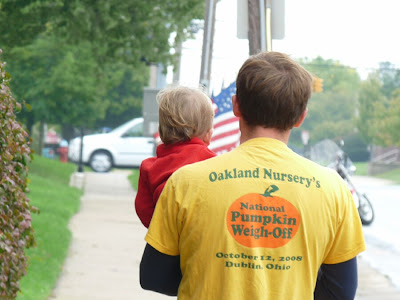 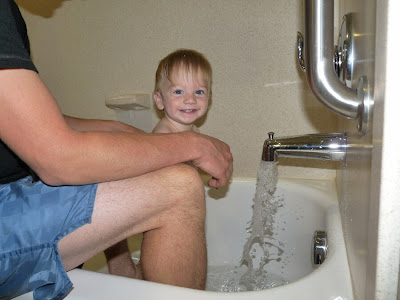 As I said earlier, we were going to go on a mini "family vacation" last weekened. We were planning on seeing waterfalls in Ithaca NY, ending up in Cooperstown for a pumpkin weighoff and regatta, then back home over a day or two. But weather and illness had other plans so we went to a weighoff a bit closer to home in New Bremen, Ohio. Blaine is better at car rides but still no superstar, so we played it safe and left at his bedtime on Friday night. We stayed in a hotel overnight in Lima [no Glee sightings, BOOO; hehe] and had a relaxing morning of Blaine playing in the hotel bathtub [huge hit], eating at Panera, and visiting a pet store [big hit too but not as big as the bathtub].

New Bremen is an awesome awesome place! Such a cute little town and great family festival. Year after year, they always come up with VERY creative things to do with pumpkins: world record pumpkin pie [for real for real], giant pumpkin car racing, giant pumpkin boating, smashing a giant pumpkin with a monster truck, etc. This year did not disappoint!

Blaine had a great time! And so did his mommy! My pumpkin estimated 1065 and ended up weighing 1315 and placing third! Now THAT is a good day!!

P.S. The weather channel was there filming! There is going to be a show called Pumpkin Palooza on there October 17th at 9 pm about "crazy things people do with pumpkins". Be sure to watch!

Congrats on 3rd place!! That is a crazy huge pumpkin!! The festival sounds awesome. I would love to see a monster truck hit a giant pumpkin...ha ha ha!

Wellllllll how about I put the Weather channel thing on my calendar so I can be sure to tune in while I'm at work that night :) Looking forward to it!

Sounds like a great trip - congrats on the third place finish!

I can't believe how massive that thing is!

Those are some really big pumpkins- lol! Congrats on the win!

I am jealous you guys are outside with Blaine so much. If it ever decides to cool down below 100 here maybe we could make some outdoor memories too!

Congratulations on your better than predicted weight! Looks like a great time out! We missed the weigh off at our fair, Bet and I took in the rodeo that day instead.

OMG - and i have lived in three countries!!!

Holy moly that is a heck of a pumpkin. Question - what do you "do" with them once you are done with the weigh-ins? Harvest the seeds to sell? Make a million pumpkin pies? Leave them in a field to rot?

This article gives clear idea designed for
the new users of blogging, that really how to do blogging and site-building.
my site :: MLM diary

I just couldn't depart your web site prior to suggesting that I really enjoyed the standard info an individual supply to your visitors? Is gonna be back ceaselessly in order to inspect new posts
My web site : Family vacation at Upper James Manor

I just couldn't depart your web site prior to suggesting that I really enjoyed the standard info an individual supply to your visitors? Is gonna be back ceaselessly in order to inspect new posts
my website > Family vacation at Upper James Manor

Hi mates, good piece of writing and pleasant arguments commented here,
I am in fact enjoying by these.
Also visit my blog ; Poker