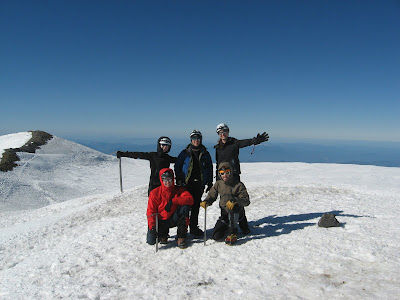 An email with no text, just this picture, appeared in my inbox timestamped 1:48 AM. They had made it! I recognized the landscape immediately that it was them at the top because I had seen photos before. He could've typed one sentence ("having fun and miss you" or something) but I'll take what I can get.

Fourth of July was awesome as always with a giant family reunion of everyone from my grandma's side. I love it because it is the only time of the year I see that side and they are all super cool and country-minded. My great uncle owns a GIANT dairy farm and his kids / grandkids all live either on it or a mile or so away. One cousin married an Amish guy who quickly turned 'English' but is super funny and a hoot to be around for a day.
I've seen 5 fireworks displays in 3 days and going to one more tonight. A little obsessed. Although two were easy to see and just involved me riding my bike across the street and up a hill in the dark.
Finally in other news, I made a separte pen for "gimpy" the chicken because he is annoying me everytime I try to move the pen but no others have died. I've been polinating pumpkins EVERYDAY and am getting super nervous as the patch tour looms in the near future.